The first sod was turned by Peggy Murphy, Kilmore Quay as the sun set on the old millennium on December 31st 1999, on a site near Forlorn Point overlooking the area aptly named ‘The Graveyard of a Thousand Ships’. The Garden, in the shape of a mooring bollard, includes a stone ship with a compass fountain, designed and constructed by John Power, which incorporates a propeller blade from the ship “Lennox”, lost off the Saltee Islands in 1916. The blade was recovered from the wreck by Edmund O’Byrne and his team of divers. The Vigil Sculpture, of two grieving figures looking out to sea, and the Ship’s Wheel, are the work of sculptor Ciaran O’Brien. The inscriptions on the plinth are by Ollie Kearns, and the stonework on the ship and surrounding wall is the work of local stonemason Declan Cleary.

Committee members manually dug out and cleared the waste ground surrounding the memorial turning it into the beautiful green area it is today. The project was brought to fruition through the support of the Department of the Marine, Wexford County Council, Aer Lingus and by the generosity of many people who contributed both time and money.

The Trail and Garden was opened on June 17th 2001 by Hugh Byrne, T.D., Minister of State at the Department of Marine and Natural Resources. Initially run by the inaugural committee, the care and maintenance of this precious place is now under the umbrella of the KQCDA. In 2013/2014 the garden was updated with the addition of a promenade leading around from the harbour to Ballyteige Burrow alongside the Garden, a viewing point with telescope, lighting and seating.

A Memorial Service is held in the Garden each year in June. 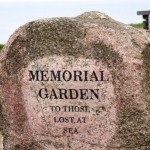